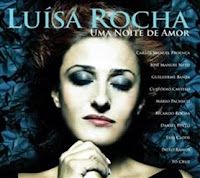 The young fadista Luisa Rocha is coming next month to the USA, accompanied by Guilherme Banza on the Portuguese guitar and Michael da Silva on the viola. The show, entitled "Fado Moves", will also include contemporary dance, choreographed by Romainson Romain. According to the online magazine "Hard Música", dates for the shows are 1 October 2011 at the Cultural Center of Fall River, Massachusetts, and 8 October 2011 at the Sport Club Português in Newark, New Jersey. The singer's new CD--her first--is entitled "Uma noite de amor".

I spoke recently with Michael da Silva about the show, and he explained that "it will tell the story of Luisa's album in music and dance." Those who saw the fado/dance sequences in Saura's film "Fado" might flinch at the thought of more of the same. Indeed, Michael himself was initially skeptical of the prospect. However, according to Michael, Romain skillfully weaves together the dance with the music, subverting neither and strengthening both. I for one am curious, as are some high profile guests who will be coming over from New York to watch the show. Here is Luisa in action on Portuguese TV.

For this show, perhaps more than with his previous venture, "Fado Nosso", Michael wants to attract young people to the event. For both shows, there will be a discount for those who are under 25 years of age (see the mdfado site for details). The space for the shows in both cities will be set up to resemble a Portuguese café, with typical Portuguese drinks and appetizer foods available throughout the evening.

Luisa is also currently singing at Alfama Restaurant in New York City, through 13 October, Thursday nights at 8pm and Sunday nights at 6pm. Check out their Facebook page for their contact info (the information on the web site for her performances is not really complete, but the info in this post is: I got it straight from them).

Additional information on "Fado Moves" is here (in Portuguese).
Posted by DM at 12:05 PM