Over the last year or so I've run into some records that I either wish I'd heard alot earlier, or that might be easy to overlook. Most of these can be found online or in stores. In celebration of finally getting on a regular schedule with this blog, I am posting some mp3s. 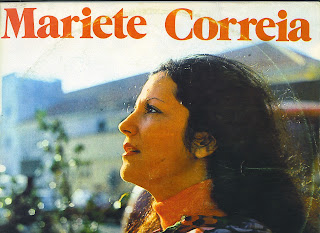 This is the only work by Mariete Correia that I have found, and there is nothing I know about the singer herself. But this, to me, is a perfect fado record: minimalist but solid production; rock-steady viola; lyrics about close-to-the-bone relationships between tough men and tough women; and an uncompromising adherence to Portuguese tradition (in this case, the bullfights).

The lyrics are great but hugely obscure. Of the eleven tracks on the album, only two are listed among the 2,455 on José Fernandes Castro's site. Four of the lyrics are by Carlos Mendonça; others are by Artur Ribeiro, the greaet Gabriel de Oliveira (two tracks, see the writeup on F. Maurício, below), João Alberto, Domingos G. Costa, and Américo M. Santos. If you want a window into the fado castiço from a woman's perspective, this is it. 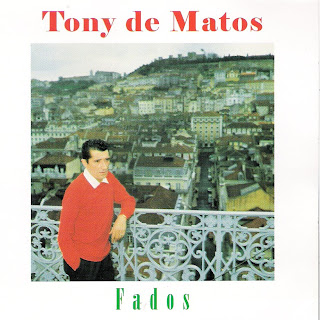 Before hearing this record I avoided Tony de Matos' repertory: too "romantic": too many strings, breezy arrangements, and dripping sentiment. Big mistake. After hearing this record I think I can understand why Fernando Maurício would dedicate "Adeus a um amigo" (Goodbye to a friend) to him.

His "Ronda dos Bairros" evokes the night-time streets of Lisbon like no other I know. The singer takes up his guitar and wanders the neighborhoods of Lisbon, finding himself at 4:00 in the morning in front of the chapel of Nossa Senhora de Saude in the Mouraria, where he imagines that the Virgin Mary is listening to his fado. The lyrics touch upon other poems (e.g., Avé Maria Fadista), where the Virgin Mary takes on a very human role. When sung by Tony de Matos, this lyric emphasizes an emotional connection between the singer and the virgin Mary--a feeling that, at that moment, she is "more a woman, more a fadista". This fado has been sung by many others. In Lucília do Carmo's version, it's the (female) singer who, at this moment in the song, feels herself to be more a woman, more a fadista.

If I have my timing right, the choice of fados of this record is pretty bold: there are fados strongly associated with female singers, particularly Amália Rodrigues ("Estranha forma da vida", "Sabe-se lá", "Lisboa antiga"); a fado in the Coimbra style ("Coimbra", also associated with Amália).  Many of these tracks can be found in the volume of the series "O melhor de Tony de Matos"). Another out of print record by him in the same vein, and one that can be found on the Internet, is "Tony Sempre Tony."

Anton Garcia-Fernandez has written an informative profile of Tony de Matos' life and work (in English). Check it out. 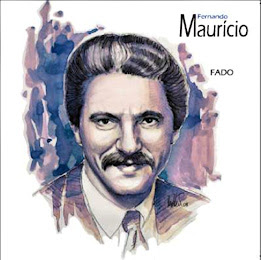 Fernando Maurício's influence on the everyday fado--the fado that gets sung in the tascas and tavernas that are off the main fado circuit--is greater than that of any other male singer. The influence is found in the singing style (see Ricardo Ribeiro, Jaime Dias, Pedro Galveias, Luís Matos, Vítor Miranda and many, many others), but perhaps just as importantly in devotion to the fado as expression of the Portuguese people. Amália is known everywhere, but Fernando Maurício really only in Portugal. Yet in the fado houses of Lisbon, the two are often depicted side-by-side (indeed it was Amália who paid to have a plaque installed above Fernando Maurício's home on the Rua de Capelão). But Maurício did not travel much outside of Portugal, and was not particularly devoted to recording in the studio. A few videos are starting to surface on YouTube that are transfers of old VHS tapes.

This particular record is from a series called "Património", highlighting some artists prominent in the fado but not necessarily well known outside of Portugal. The documentation and production quality are very good--perennial concerns with many lesser-known fado singers. Two of these tracks really struck me: "O grande ausente", which is a lyric about the great poet of the Mouraria neighborhood, Gabriel de Oliveira; and "Despertar", which I think is interesting in part because of the musical space that Maurício leaves in the song. As many have said, Maurício was an "estilazista": a stylist, meaning that he could approach the same lyric multiple times, even with the same music, and make every performance distinct and different.

Another Maurício record that is reasonably easy to find is the collection "Saudade de Fernando Maurício", a two-CD set that contains some of his really powerful work, including "Boa noite solidão". Here is Maurício singing "Alfama" (at 3 minutes into this clip). 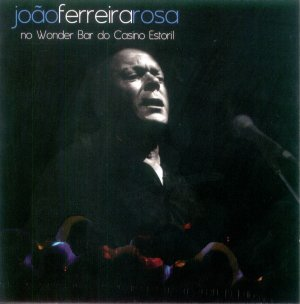 This is a recording taken from some very rare appearances by João Ferreira-Rosa at the Casino Estoril in Portugal. I think it's accurate to say that Ferreira-Rosa is one of the only high-profile fado singers who consistently evokes political themes in their work. It's just that his theme of choice is a bit contrary to expectation: bring the monarchy back, now. But I take the songs for what they are worth: harkening back to a Portugal of aristocratic values, honor-based culture, and convívio (comraderie) among friends. Those interested in the intersection between politics and the fado might check out a recent posting on fado cravo or examine Rui Viera Nery's book, "Para uma história do fado". There appears to be ample evidence that political views have always made their way into the fado, though again there does not appear to be much of it these days.

It's worth listening to this record not only for the quality of the singing and musicianship (both very high), but also for the level of intimacy and sense of ceremony between the singer and the audience. The emcee says at the onset "There are lots of people here who know about the history of our friend João Ferreira-Rosa." Indeed, it's clear that lots of people are intimately familiar with the man and his work. There is a very loud cheer from the audience when Ferreira-Rosa announces that he is going to sing "O Embuçado", a fado about a hooded habitue of the fado who turns out to be the king of Portugal. Ferreira-Rosa dedicates the song to a Spanish royal lady who is in the audience (I believe she actually got married at the Casino many years ago). In this episode and others, Ferreira-Rosa hews very close to the fado singer's traditional role: state the name and author of the poem, the composer and name of the fado, then put everything you have into singing it and say thank you when you are done. This is something that I heard Artur Batalha do many times, but is unfortunately not a practice that is uniformly followed.

Here are a couple of videos of João Ferreira-Rosa. The first is taken from the series "Vamos aos Fados", which is now being re-shown on RTP/Memória. The second is from Amália Rodrigues' 75th birthday celebration.

Fado do Sonho
Triste Sorte
Posted by DM at 6:47 AM