I spoke recently with the Luso-American fadista Nathalie Pires. I invited her to discuss her life within the fado for this blog and she responded with this great essay. I hope you enjoy it!  -DM 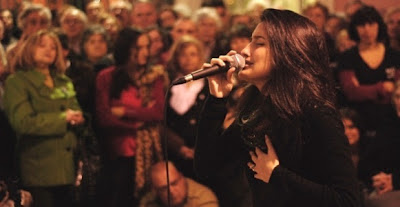 When interviewed, I have yet to meet a reporter who doesn’t ask me, “What is Fado”? I always give what I feel is a generic answer: Fado translates to fate or destiny, and it is also a genre of music that many explain as an “urban folk music” that is unique to Portugal. But what Fado is to me personally is an energy inside of me that longs to be released. There is a different Fado for every emotion I have ever felt, and countless Fados I could almost swear were written specifically about my life experiences. There is no other genre of music I can identify myself with. 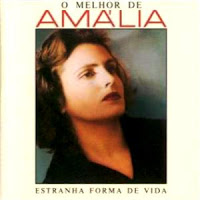 But I didn’t always feel this passionate about the “Portuguese blues”. In fact, I remember being a child and my parents dragging me to Fado nights at the local Portuguese clubs. We’d be there for hours listening to what seemed like old women dressed in all black, crying and complaining in song all night in candle light with a constant steady cloud of cigarette smoke hanging over the whole room. My intuitive recognition of this ambience wasn’t a positive one, and I thought of Fado as “old people music”. That is, until years later: April of 1999, when I was invited to sing at a Fado night in my hometown of Perth Amboy in New Jersey.

In preparation for my performance, my father gave me a 2-disc album of Amália Rodrigues’ greatest hits and my mother bought me my first black shawl. I learned 3 fados with lyrics that we felt weren’t too heavy for a 13 year old girl. I sang for the first time accompanied by a classical and Portuguese guitar in a dark room, in front of a quiet and very intense crowd. The whole time I felt extremely intimidated by the attentive audience, hypnotized by the sound of the guitars, overwhelmed by the emotion these Fados demanded of me, yet in complete control of my performance. That night I discovered the power of Fado: the audience’s support and reaction was my driving force to pursuit being a “Fadista.”

That September, I mourned the death of Amália Rodrigues along with all of Portugal. My greatest idol had passed away and Fado entered a dark period. Many in Portugal were convinced that Fado was going to die out along with the passing of the Portuguese icon. I, however, was born and raised in the United States where every Portuguese immigrant or luso-descendant I knew were super proud of their roots and extremely dedicated to keeping our traditions alive--including Fado. So, I continued to learn more Fados and was little by little becoming more popular within the Portuguese community. Word was spreading that there was a young girl singing Fado and crowds would curiously gather to listen because it was so unusual for someone so young to sing such deep topics. But I did, and although I couldn’t relate to every lyric I sang, I was extremely dedicated to my new pastime.

As I got older, I sang Fado with growing confidence. I grew closer to my guitarists, who helped me select my repertoire and choose the right keys for my maturing voice. I became more familiar with my audience, and with the Fados that we connected to the most. Before I knew it, my schedule was getting busier and busier with frequent performances along the east coast and even Canada. This was one of the most rewarding times of my career because I got these opportunities simply by “word of mouth”. 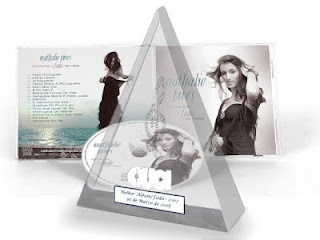 In 2007, I recorded my first album Corre-me o Fado Nas Veias ("Fado runs in my veins"), thinking it would be a nice keepsake. To my surprise, the album was released with huge success and even had a hit original single in California called “Festa Brava a Portuguesa” which was written by my father, Telmo Pires. It was awarded “Album of the year” by United Artists of America. Before I knew it, I was busy touring Portuguese clubs, restaurants and associations around the country. Some of my other performances included one at the United Nations, where I represented Portugal for ambassadors from all around the world. I also sang for the Vice President of the Portuguese Republic at the Boston State House, at Portugal Day in Central Park in New York City, at SOUNDshift International Music Festival in New Foundland (Canada), and at Brooklyn Academy of Music’s Next Wave Festival’s “Tudo Isto é Fado”.

I have also performed in some of the most prestigious Fado houses in Lisbon:  Sr. Vinho, Bacalhau de Molho, O Faia, Mesa de Frades, Taverna d’el Rei, and Clube de Fado. I was honored to be invited to sing at the VI Gala Amália award ceremony. I also took part in the celebration of UNESCO's  announcement at the “Museu do Fado”, with António Parreira (guitarra portuguesa), Guilherme Carvalhais (viola) and Armando Figueiredo (baixo). Fundação Amália also recognized my accomplishments as a Portuguese-American fadista with a medal, and claimed me as an ambassador of the fado in the United States.


But my most rewarding performances are by far my weekly gigs in New York City. I enjoy singing without amplification in the intimate environment of 30-50 people of diverse ethnicities. I love it when the audience interacts and asks me about the poems and emotions that I’m interpreting and questions the roots of the Portuguese guitar. Sometimes it’s even overwhelming for the audience as I recall one time an Italian man who was in the City on vacation cried uncontrollably even though he claimed he didn’t understand the language but he explained that he imagined what he felt I was singing through my expressions. For an artist, nothing can top that.

Singing in Manhattan has also given me opportunities outside of Fado. I met Tim Ries, one of the best saxophone players in the world, who has also toured and recorded with the Rolling Stones. After listening to my album, he invited me to perform at Highline Ballroom in New York City, and then in Austria. I sang two songs that he had recorded with Ana Moura for his album “Tim Ries and The Rolling Stones Project”, where he adapted the Rolling Stones hits “No Expectations” and “Brown Sugar” with Fado influences. That experience was surreal.

I also had the opportunity to sing the Star Spangled Banner at the New York Red Bulls Major League Soccer season opener in their stadium with over 20,000 enthusiastic fans. That was the most exciting/nerve-wrecking performance of my life! Singing in Manhattan also gave me the opportunity to meet Pedro Henriques da Silva, co-founder of the “Manhattan Camerata” where I am occasionally featured during many of their concerts and even their debut album. I am also actively involved in their Tango-Fado Project, which also features Grammy nominee Daniel Binelli, one of the world’s best bandoneon players. Being accompanied by an orchestra has definitely been one of the highlights of my career.

I’m also proud to share that living Fado legend, Anita Guerreiro is my godmother (madrinha) of Fado. She gave me this honor in front of an audience in 2008. She has just celebrated 55 years in her career yet gives me the upmost support and respect.

But some of my most fulfilling experiences in Fado weren’t during my performances at all. One time I was listening to Fado while driving on the NJ Turnpike and as I was reaching out to pay the toll, the man in the tollbooth stuck his head in my car when he realized what I was listening to and exclaimed that he was a huge Fado fan without even knowing who I was! Meanwhile, the drivers behind me started to honk their horns and interrupted our unusual encounter. Another time, I was set to perform in a festival in New Bedford, NJ and without ever meeting me before then, an American man gave me a Fernanda Maria LP that he had found at a thrift shop simply because he wanted to give it to someone “who would appreciate it”. I appreciated it even more because of his kind gesture. Even at my own wedding, as my husband and I celebrated with our guests, almost everyone requested that sing. So I did. Overall, the continued support I get makes it all worthwhile. It is both inspiring and motivating. It’s extremely draining juggling my professional career as a fulltime accountant while being so dedicated to Fado. I justify it by accepting that accounting is my reality and Fado is my therapy. 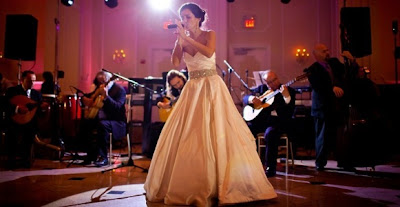 Through all of my experiences, Fado transformed from being a pastime to a responsibility, but always my passion. Besides from the satisfaction it gives me as a performer, the poems that I sing have taught me so much about Portugal and I’m proud to share our music with an audience that I can connect to. I’m often asked why I think Fado is so successful in the United States. My answer is because I’m singing about life, Portugal and of course “saudade”. What Portuguese immigrant or descendant doesn’t relate to that? And for those that listen to Fado and don’t speak Portuguese, I believe enjoy it for the emotional thrill they get from the musicians. For that simple reason, I am proud to be a “luso-american fadista”. I never dreamed of accomplishing all that I have with Fado. I truly believe Fado is my destiny and the more life throws at me, the more natural it is to me. It is my mission to continue to spread Fado to whoever is willing to listen!

Future performances that I’m looking forward to include: