{Note: with Ricardo Ribeiro's permission, I'm posting this English-language version of his biography. If you have a chance, check out his latest CD, "Porta do Coração", which I've written about elsewhere on this site, as well as the CD "Em Português" discussed below. Other articles about Ricardo from this site are here. An English-language translation of an interview with him is here.}

Ricardo Ribeiro was born in Lisbon. He debuted in public at the age of 12, in The “Ajuda” Academy in the neighborhood where he grew up. In this first show he was accompanied by the guitarist Carlos Gonçalves and the violist/classical guitarist, José Inácio who became one of the major references in his career. His main influences are: FERNANDO MAURICIO, MANUEL FERNANDES and ALFREDO MARCENEIRO, all of which are old-style traditional fado singers.

"When I first heard Fernando Maurício, his singing was so intense that it made me feel a part of the story he was telling."


At the age of 15, he joined the cast of the restaurant "Os Ferreiras" in Lisbon - sharing the Fado evenings beside his master FERNANDO MAURICIO and ADELINO DOS SANTOS (guitarist). Through this experience and by studying everything that involves Fado, Ricardo Ribeiro gained a great knowledge of the traditional style of Fado, specifically, the old-style traditional Fado. Later he was part of the cast of the typical restaurant "Nónó" in Bairro Alto, which opened the doors for him to the most important Fado Houses in Lisbon.

The album “EM PORTUGUES” of the Lebanese musician has a repertoire fully interpreted in Portuguese. The interpretation of Ricardo Ribeiro received many acclaims and the very best compliments. This album was released in 2008 by ENJA RECORDS. All compositions by RABIH ABOU KHALIL are from poems by SILVA TAVARES, MARIO RAINHO,  TIAGO TORRES DA SILVA amongst others. "EM PORTUGUES" was voted one of the 10 best albums "Top of the World" in the British magazine "Songlines," which refers to Ricardo Ribeiro as "... the rising star of Lisbon Fado". 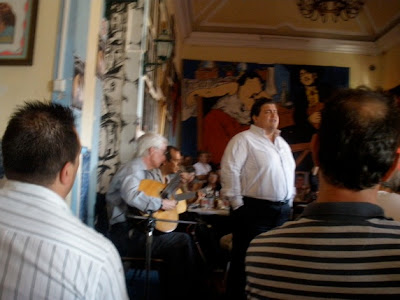 In the words of RABIH ABOU KHALIL , Ricardo Ribeiro as a singer cannot be expressed better: “Working with Ricardo is an exhilarating experience. A musician; so instinctive and natural, so deeply rooted in his culture that at all times he manages to transcend it. A singer so unusual; he never attempts to stand alone, but connects with the musicians, never missing a beat, inspiring them and letting them equally inspire him. Ricardo Ribeiro is not a singer. Or, to be more precise, not only a singer. There is a very important element of expression in Arabic music called “Tarab”. A term not easily translatable, it describes the feeling of being emotionally moved by music. Perhaps the closest to it would be the Portuguese expression of “Saudade”. A singer who can make his listeners feel “Tarab” is a “Mutrib”. Ricardo is not a singer, he is a mutrib. Ricardo Ribeiro is not just a cantor, he is a saudador...”

He participated with two themes in the film "RIO TURVO" directed by EDGAR PERA alongside Teresa Salgueiro and Nuno Melo. In 2010 he participated in "FILME DO DESASSOSEGO", a film directed by JOÃO BOTELHO and based entirely on the heteronym “Bernardo Soares” created by the Famous Portuguese writer Fernando Pessoa. In this film Ribeiro sang two songs, one of which was played and composed by him.

However, it is with Fado that he truly identifies himself: “Fado is all that happens. When we laugh or cry when we remember or forget. When we love or hate.”
AWARDS

Ricardo Ribeiro is more than just a Fado singer. Currently he is working on a project with the ingenious guitarist, Pedro Jóia, accompanied by, the greatly talented Rui Borges Maia(flute), Yuri Daniel (bass) and Vicky Marques (drums). This project transcends Fado as it takes us on a journey with the dynamic quintet that spans the musical worlds of the Mediterranean and the wealth that they carry.  The combination of Fado, Flamenco and the music of the Maghreb are treated with all the passion that emanates from their common matrix.