The fadista and musician Carlos Macedo visited Newark, NJ yesterday (7 April) as part of a Grande Noite de Fado, which also involved about twenty other singers and musicians, including eight medical students from the University of Porto. The impresario (and an editor of the Luso-Americano) Luís Pires organized the event, and served as the emcee, keeping a steady hand on a night that--in less capable hands--could have dragged on until two or three in the morning. There were many highlights, plenty of revelations, a couple of awkward moments, and a lot of good fado. In other words, this was the kind of evening that is normally very difficult to find here in the United States. But as Carlos Macedo said from the stage, "This is Portugal."

Given the variety of singers, styles, music and lyrics performed last night, the musicians deserve special recognition. These were José Silva (guitarra portuguesa), Viriato Ferreira (viola), and Pedro Pimentel (contra bass). My understanding is that they are based in the Rhode Island area, and travel throughout the northeast playing with various singers. They were rock solid.

Part One
The evening began with fado singers who, as Luís Pires said, happen to be located in the USA. But, said Pires, "They are not Luso-American fadistas--they are fadistas." As Luís was introducing the night, he quoted from the lyrics to Lisboa Antiga, which caused somebody way in the back to break out spontaneously into that fado. The entirety of the room quickly joined in, and we are on our way (as the Portuguese say, "Vamos embora!").

Here's my list of singers and what they sang. 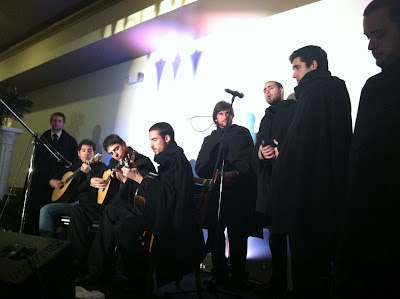 Part Two
The Tuna Académica of Porto, comprised of eight young people, all medical students, took the stage to sing the fado of Coimbra. The group, whose formal name is "Grupo de Fados de Medicina do Porto", has been active for more than twenty years, and travels to Portuguese communities worldwide.


The current group consists of three players of the Portuguese guitar (tuned for the Coimbra fado), two players of the viola do fado, and three singers. In a brief interview before the show, they explained that the classic repertory of the Coimbra fado resonates most strongly with the Portuguese communities abroad. They were a very capable group. Indeed, one of the audience members told me he felt that one of the singers could certainly abandon his career as a doctor and find success as a fado singer. Later in the evening, as the entire audience sung along with the chorus of the "Balada de Despedida", I saw clearly what he meant. The group's repertoire also includes three or four original compositions. Look for them on Facebook under their official name. 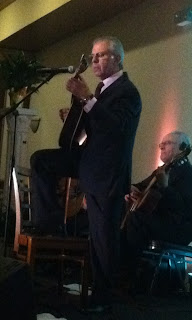 Part Three
Carlos Macedo, the headliner of the night, traveled from Portugal to sing and to play the Portuguese guitar. While his style is subtle, it commands attention and respect, and is certainly his own. In his long career, he has achieved a great deal of recognition as a singer, musician and songwriter. After more than 25 years as the house guitarist at Senhor Vinho in Lisbon, he now performs at Taverna d'El Rey in the Alfama--an intimate and storied venue.

Tonight he entered singing from the back of the room, surprising everyone. His first song, "Quero ir à minha terra" (with lyrics by José Luís Gordo and music by Carlos Macedo), was sung in a very relaxed style, and followed by a mix of his own and others' works. Among the more notable performances were "Avé Maria fadista". Along the way, he quite unexpectedly made reference to the "fado humorístico", or humoristic fado. As he said, "it's a playful thing--but it's true." Now, the word for mother-in-law in Portuguese is "sogra". He took the theme of the song, "Zanguei-me com meu amor" ("I became angry with my lover"), and turned it into "Zanguei-me com a minha sogra"--an uproarious lyric of his own authorship that was all the more special for never having appeared on one of his recordings. After this, and perhaps in order to bring order back to the house, his next song mined the religious vein of the fado. It was "Igreja de Santo Estevão", a fado made classic by Fernando Maurício but here sung in Macedo's own style.

During the show he also discussed his love for his wife, and recounted that, when she was diagnosed with cancer, he said that he would undertake a pilgrimage to Fátima in the hope that she would be cured. Indeed she was cured, and he went on to write a book about the experience. He then sang his own composition "Ser peregrino" ("To be a pilgrim"), with lyrics that describe how the pilgrim becomes closer to God by undertaking the pilgrimage. It was a deeply moving moment, and a fitting way to encapsulate a show held on Holy Saturday.
Posted by DM at 7:39 PM