Day 4 in Lisbon (revised and expanded)

In the morning I took my want list in hand and headed to the Feira da Ladra to buy some music. There is only one vendor I pay attention to--Jaime Padrinho. He is easy to find: his stall is always at the northern end of the market, and he is usually playing something by Amália Rodrigues (often very loud, often the same fado multiple times). Works like a charm. I have spent many hours there, and his method never fails: put on Amália singing "Estranha forma da vida" and the tourists will show up to ask "Who is this?" Within seconds they are buying a copy of "O melhor da Amália".

To the side of the CD table he has a small but very respectable selection of vinyl and cassettes. That is where the real action is. Sr. Padrinho has all the qualities of a great record seller: tasteful stock, understanding of the customer, the appropriate degree of detachment. In fact, it was he who first recommended that I listen to Artur Batalha. This time, he recommended an LP from Vasco Rafael. When I returned to the US, I put it on: this is a singer who had a very big, earnest sound. It's a top flight record in the castiço tradition.  I also picked up a 45 of Fernando Farinha--brilliant as always. 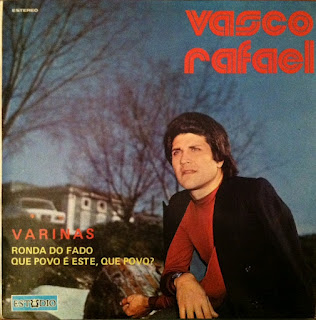 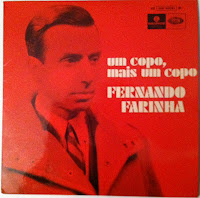 Later that evening, after many months of trying, the opportunity had finally arisen to interview Mário Raínho, an iconoclastic poet of the fado. Raínho has written lyrics for many singers, ranging from Fernando Maurício to Ana Moura, and is outspoken about the critical importance of poets and lyricists to the continued vitality of the fado. This importance is partly a consequence of the nature of the art form. The "fado tradicional" (traditional fado, or, perhaps more appropriately, the fado estrófico--or strophic fado--as the guitarist José Pracana has referred to it) consists of a smallish number of musics. The "fado tradicional" approach to the fado therefore requires new lyrics set to works within this corpus of music if the form is to survive, or at least not become stale. Another force at work here is the simple fact that there are lots of people who go out and sing multiple times every week--and many more who go out to here these same people every week. And when I say "every week", I mean it. Now, do you really want to hear the same three lyrics from the same singer every week? Hence, the poet.

Raínho has recently become involved with organizing fado at a small restaurant called "Pérola do Fado", (Pearl of the fado) and this is where we met to discuss his work. The interview produced a lot of material, though we only spoke for 30 minutes. One interesting tidbit: Mário began as a singer, who eventually wanted different lyrics to sing, and thus began his career as a poet. Pick up any current fado record, and the chances are good that at least one of his lyrics is included.

The Pérola's location is "out"--not in Alfama, not in the Bairro Alto, not anywhere near the tourist track--but actually not at all far out of town. Maybe this is how it's going to be for a while: the fado is going to hide in the hills until the craziness over the UNESCO designation dies down. Judging by the results of this evening, if you're willing to venture just slightly beyond the standard confines, there are some beautiful moments to be had.

Pérola is divided into two spaces: café in the front, restaurant in the back. The fado happens in the back. Dinner was great and not at all expensive. The musicians for the evening were Paulo Jorge (gp); André Ramos (vb)--more evidence of the small world of the fado as he is the brother of the singer Miguel Ramos; João Moreira (vb); and, later, António Oliveira (vb).


As I learned, the singers and musicians were all essentially professional: many of them had "other jobs" but were here for the night to sing for each other, and for others with a very strong appreciation of the fado. The repertory and style of playing were nothing like what you would hear in the first hour or two at the typical fado joint: they got right to the heart of the matter.

Miguel Ramos was the first singer. He delivered a powerhouse performance--quite different from the subdued one I expected. Unfortunately, I do not have any recording whatsoever of his performance: I was too flabbergasted to do anything. Buy the record! Next was Ana Sofia Varela. Her voice was really not with it this evening: seemed like she had something perpetually stuck in her throat. Next was Jorge Aguiar, followed by Jorge Nunes (mp3) (the son of Jorge Fernando)--instantly recognizable by his voice.

Now an intervalo. As I ventured outside, Artur Batalha was just arriving. "It's the first time I've been here", he said. At some point I asked Mário if he could somehow squeeze Batalha into the lineup before we had to leave. He said he'd try. In truth, it was not a very fair request, as the house was full of fadistas who had been waiting for their turn to sing. But I was beginning to feel desperate. The next singers Nelson Lemos and  Sónia Santos (mp3). Here is a fairly recent video of her from RTP. Judge for yourself: I liked her quite a bit. Then that was it: we had to leave.

To give a flavor of his work, here is a translation of a short lyric of Mário's, most associated with Fernando Maurício, entitled "A minha oração" ("My prayer"). Many thanks to Mário himself for providing the lyrics and the translation. 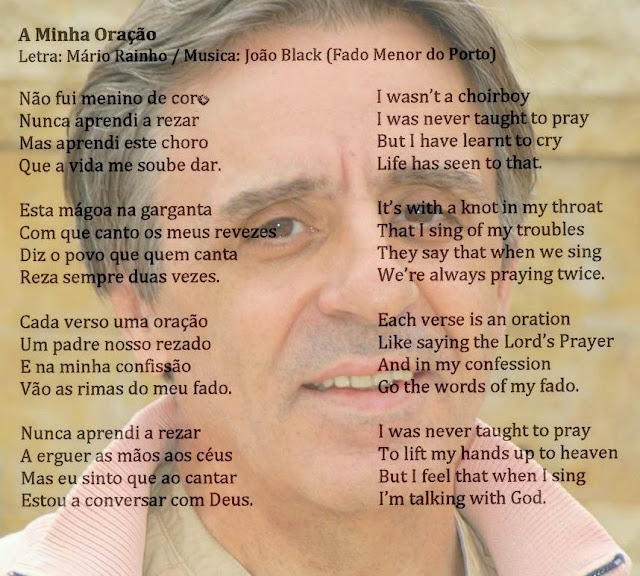