Walking through the Alfama this evening, we stopped to talk with Carlos Macedo during one of his breaks at the Taverna del Rey. Macedo is known as a pretty serious guy, but those who have seen him live know that he has a humorous side. For example, during his recent visit in Newark, he sang "Zanguei-me com a minha sogra" ("I got mad at my mother-in-law"), a very dry and funny riff he wrote to the tune of "Zanguei-me com meu amor", the latter popularized by Amália Rodrigues. Unfortunately, this is not something he has ever recorded. During our conversation, he mentioned one of his lyrics--"Um governo à portuguesa"(lyrics here) that he has recorded--to the tune of "Uma casa portuguesa". As Carlos explained, the humoristic side of the fado has been around for quite a long time--though it has certainly fallen out of favor (along with political fado--a point that was strongly made by José Manuel Osório in many interviews). There are a few fadistas who sing exclusively humoristic fado these days, including the great Zequinha. We did not get to hear Carlos singing this night--but watch for a later report on the night that we did. 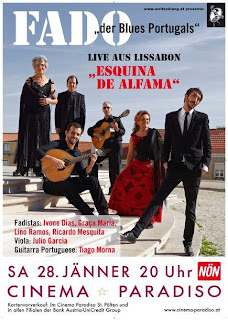 We (including my wife and children) then visited the Esquina d'Alfama. The elenco, after making a whirlwind and very successful tour of Europe (see poster), was a bit different than it was for that tour--but the vibe was just as good. On Portuguese guitar was Gentil Ribeiro (back to the Esquina after a sojourn that included the Bairro Alto), and on the viola, Júlio Garcia. For this trip, I planned next to nothing, and the improvisatory attitude was beginning to pay off. Pedro Galveias was there. Also singing were the stalwarts, Ricardo Mesquita and Lino Ramos, along with Cátia Garcia. The Esquina is a very informal and open place. The food and the fado are good, and there is no pressure put on you to eat and get out. While there do tend to be tourists there, they tend to be respectful and appreciative of the fado. The evenings start early at the Esquina, and there are always plenty of pleasant surprises--particularly early in the evening. It can get a bit rowdy at times, but once the fado starts getting serious, Lino or somebody else will calm down the crowd. All of these factors help make the Esquina a house that we visit at least a couple of times whenever we are in Lisbon.

Speaking of children and the fado, one of the many CDs I picked up in Lisbon was Saudade no Futuro.  This is a record performed entirely (music and singing) by younger Portuguese kids. There is alot of talent in this group, and it is used quite wisely. If you are interested in the fado, and want a way to introduce it to younger listeners, this is the record for you. My kids--who frankly get a bit tired of the fado at times--asked to hear this record repeatedly, and read the liner notes (full credits and everything) until they had settled on their most preferred singers and musicians. The CD is even available in mp3 format on Amazon (in the US!) if you search for the title "Fados Dos 8 Aos 17 Anos". Highly recommended (watch for a full review in the near future on the web site of the Portuguese-American Journal)
Posted by DM at 2:34 PM