One night at Sr. Fado in Lisbon

I've been meaning to write this article for a while. The longer I wait, the more daunting the task becomes. The fact of the matter is that I went with friends to hear the fado in Lisbon, and it became one of those nights that captures just about everything that is the fado.

I was in Lisbon for a conference that I helped organize, and wanted to bring a few people out for the fado. I spoke with Ana Marina and Duarte at Sr. Fado, and they said they could accommodate our group of seven (no six, no ten, no eight, no really, seven)--which represents a significant percentage of the total seats available, maybe twenty maximum. The atmosphere here is very relaxed. The kitchen is in the back, just off the main room. Doesn't matter: the cooking staff is the talent--so there's never kitchen noise during the fado (compare with some of the joints in the Bairro Alto). 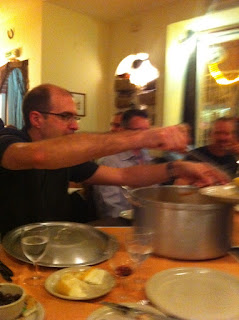 No one in the group except me had ever been to the fado before. I warned them: This is not tourist fado. We're only going to be able to talk in between the fados--never during. We are going to have to eat there. And I am not making any promises whatsoever about the quality of anything, including the fado. They all agreed to come anyway.

We arrived for dinner. Meanwhile the musicians were warming up, discussing various fados. Ana Marina and Duarte were working the kitchen, preparing the cataplã. Our group consisted of Zeno, Mark, Michelle, Bartel, Frank, Julie and Brian. 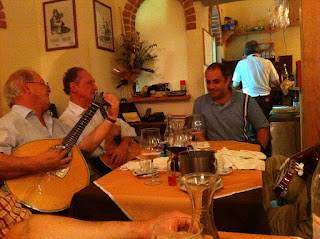 This was a Wednesday night, which is when the "tertúlia" happens: a wide variety of friends and colleagues comes to play and sing. A few of the singers are somewhat regular, but many are not. The corps of musicians is more stable, but again--one never knows who will show up. Tonight on the guitarra portuguesa were Dr. Nuno de Sequeira, José Barnay, Carlos Albino and D. Edmundo Albergaria (yes, four guitarists); and on the viola, four others: Duarte Santos (the proprietor), and three engineers: Renato Infante, José Infante, and Ferreira-Alves. This is alot of musicians, though not all were always playing.
Between the time when we arrived (about 20:00) and the time we left (03:00 the next day), we heard alot of music and many fadistas. Here's my list, from first to last to appear (follow the links to the videos). A guitarrada opened the evening. Quim Cigano (literally, Joe the Gypsy) was the first to sing. He is an imposing presence, with a very rich baritone, long gray hair in a pony tail, and a very dark look in his eye. Next was Fernando Morreira, followed by one of the revelations of the evening, Carlos Mendes Pereira. This is a singer who is very strongly in the tradition of the fadistas of the "other side"--across the Tejo river in Alcochete. I do not have a decent picture of him from this evening, but at left is a photo graciously provided by the other Sr. Fado, (no affiliation with this one, and perhaps not coincidentally located in Alcochete). I have heard that it is an excellent place to hear the fado. Mendes Pereira's version of "Maria da Cruz" evoked many singers, particularly João Ferreira-Rosa (who is strongly associated with this fado) and Carlos Guedes de Amorim, both of whom are linked to Alcochete in various ways. But Mendes Pereira's performance distinguished itself from those of both these other singers. Here it is (apologies for the crummy quality).


The next fadista was Ana Marina. Her transformation from cook to heartbreaker is shockingly fast, but subtle. Perhaps it is this combination of working and singing that enables her to connect with the other people in the room without pretension or distance. Here she is singing "Não vou, não vou", and here singing "Maria Lisboa". After Ana came Nuno Siqueira (the guitarist), followed by Quim Cigano and Dr. Manuel Tomás, here singing a menor. Next was Maria Júlia, a classy lady who I heard sing many times at the Baiuca and other houses during my year in Lisbon.

While all this was happening, I kept seeing Artur Batalha darting around outside, occasionally peeking in to the restaurant.

Somewhere around this time there was a break. I managed to get outside and talk to Batalha for a few minutes, also with Fernando Morreira--simpático as always.

The next fadista, Leonel Moura, sang the "Fado da Internet" and "Pastel de Nata", both of which are very light, even humorous, fados. Dr. Tomás then sang the "Fado dos Saltimbancos", another fado associated with Alcochete, with Carlos Mendes Pereira.

Probably there was another break. Now it was late. Almost everyone in the restaurant except Zeno, Mark, Michelle, me and a few other die-hards had gone home. I was losing hope that Artur Batalha would sing. But whaddya know? There he is,  standing in the doorway, ready:

As I saw Batalha heading down the Rua de Regueira, Duarte said to me about him: "Ele abre a boca, e o que sai é fado". Which may be translated as, "He opens his mouth, and what comes out is fado." As in, by definition.

The night concluded at 3am with Ana Marina. Thanks to Ana Marina and Duarte for the lovely evening. And thanks also to Mark Pfaff, his friend Michelle, and to Zeno Franco for contributing the still photographs.