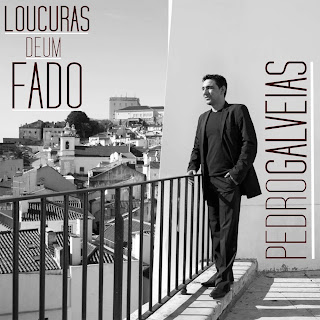 Pedro Galveias is an established fado singer in Lisbon who has been on the scene since he was a young boy. With this release from Saudade Records, his singing is finally getting a proper representation on disc. Here he reveals a deep sensitivity for both established and new material. Tracks such as "Eu Quero" ("I want") and "Uma Gota de Alegria" ("A drop of happiness") suggest his compelling presence as live singer. This is an excellent introduction to the fado as it is happening now in Lisbon--the kind of view that you normally have only by visiting there. For a sample of Pedro singing with some top-flight musicians, see this.

Pedro recently (12-Jan-2012) appeared on Portuguese TV singing Eu Quero, and also being interviewed. Pedro is worth seeking out if you ever visit Lisbon. He sings regularly at Os Ferreiras, and at various locations around the city (tough to predict exactly where). Though still only in his 40s, he has been singing for more than 30 years--and the experience shows. He won the Grande Noite do Fado twice, first in the young people's category (in 1986), then in the adult category (in 1995--see photo). He is one of a group of very successful singers of this generation, including Jaime Dias, Luis Matos, Vítor Miranda, Ricardo Ribeiro and Miguel Ramos. All of them were deeply influenced by the great Fernando Maurício, particularly in their ability to communicate directly with their audience.

I've had many opportunities to hear Pedro and to speak with him, both in Portugal and in the US. In Lisbon, he sang frequently in the Mouraria (here's a writeup, in English, of one such event, along with video, but here's another). In the US, he visited Newark, NJ not so long ago. Here's a sample.

The record is available on iTunes (even in the US!).