Ana Moura brought an eclectic but strongly traditional fado experience to the Zeiterion Theatre in New Bedford on Saturday night (4-Feb), the first stop on her 2012 North American tour. If you don't know the fado or are curious about it--and even if you do know the fado--this is the tour for you.

The band opened with a guitarrada, after which Ana promised both traditional and "musical" fado (that is, music that is relatively new, or that has not yet entered into the fado canon). Unless my notes are wrong, she then sang "Fado das Águas" and "Fado vestido do fado", both from her new record, "Leva-me aos fados" ("Take me to the fados"). While the music was often traditional fado, the lyrics were usually new. Some of them, like "Caso Arrumado"--written, as Ana explained, from the perspective of a woman in a love triangle--might not have made it through the censors that operated in Portugal during the Salazar dictatorship. Some of her selections were earthy and seductive ("Porque teimas esta dor"--Why do you fear this love?), while others spoke of loneliness and separation ("Por um dia", or the classic "Loucura").

The energy level started high and stayed that way. This was due to some perfect combination of artists (Ana and her band), repertoire, and audience. 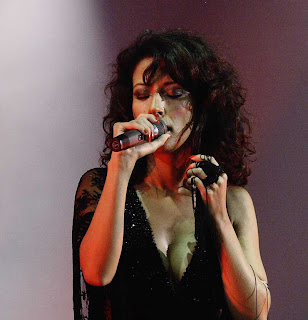 Ana Moura has been on an upward trajectory since her career began in earnest with the album Aconteceu ("It happened"). I heard her first in 2005 at Joe's Pub in New York City. I'd never seen a fado singer shimmy before (my late aunt, who really knew the music, said that that show was the best she'd ever seen). In 2007 I heard her in The Hague at a double bill with the crazed Nynke Laverman. The Dutch went bonkers for Ana. The last time I saw her was in 2009 at Campo Pequeno (Lisbon) in a tribute to Amália Rodrigues. She is good on record, but in a live setting her voice has better projection, and is fuller, more expressive and more intimate. She sang with power and grace, with no pyrotechnics whatsoever, and tremendous magnetism ("You want us to clap now? Of course, no problem, we're doing it.") She said in an interview some time ago that she only sings what she feels. Now that attitude, perhaps as a result of her maturity as a singer, is really paying off.

The band dug deep into rhythms and layers that are often only implied. Ângelo Freire, a young guitarist (and singer) who has toured with Mariza and played with many others, has a fast, subtle style on the Portuguese guitar. He moved deftly through the two guitarradas (instrumentals) of the night, and he shined in fados like "Os Búzios", providing a fresh perspective on music that Ana has played probably hundreds of times. Even "No Expectations" and "Brown Sugar"--which could have been real clunkers--came across pretty well. The Portuguese guitar is a delicate instrument that relies for rhytmic backing on a six-string "viola" (a classical guitar) and sometimes a "viola baixa" (a four-string bass guitar). The viola baixa, here played by Yuri Daniel in his first date with the band, was a type of electric bass. While the reverb added depth to the sound, at times it drowned out the finer points of both the guitarra portuguesa and the viola (played by Pedro Soares), both of which were acoustic.

The end of the main show came on shockingly  fast, and the crowd did not take it too well. We had been on a nonstop, intense ride through the fado, with plenty of verbal exchanges between the exceedingly discriminating audience (consisting of lots and lots of Portuguese) and Ana, and no one was ready to call it off. Ana herself seemed a bit taken aback by the whole thing. There were people yelling out for their favorites from the repertoire of classical fado, and from hers as well--and she was actually listening. This is something that happens all the time in Portugal, but very seldomly here.

The band came back for an encore that drew on the Portuguese folkoric tradition (with "Bailinho à Portuguesa" and "Fadinho Serrano", both masterfully done), along with "Esta noite" and that damn Rolling Stones song. After this, despite all the energy left in the room, we admitted defeat and decided to wait for the next time she'd take us all to the fados.
Posted by DM at 7:49 PM